The historic farm and salt works property dates back to 1830 and has been owned and operated by the Cotton family since the 1970s. Lisdillon’s history as a once bustling township can still be felt in the beautiful old cottages which have been lovingly transformed into private homes and boutique accommodation.

The first pinot noir vines were planted in 2009, establishing Lisdillon vineyard. Working with Winemaking Tasmania, our first vintage was produced in 2013 and since then, the vineyard has expanded and is now producing award-winning pinot noir and sauvignon blanc.

Each of Lisdillon’s four cottages have been lovingly restored and beautifully decorated to match their historic and tranquil location. Offering modern amenities, privacy and stunning views, the cottages are the perfect spot for your weekend getaway, extended stay or family holiday.

Unique to Lisdillon is The Gregan Retreat. A creative space named in honour of late artist Kerry Gregan, a close friend of the family. 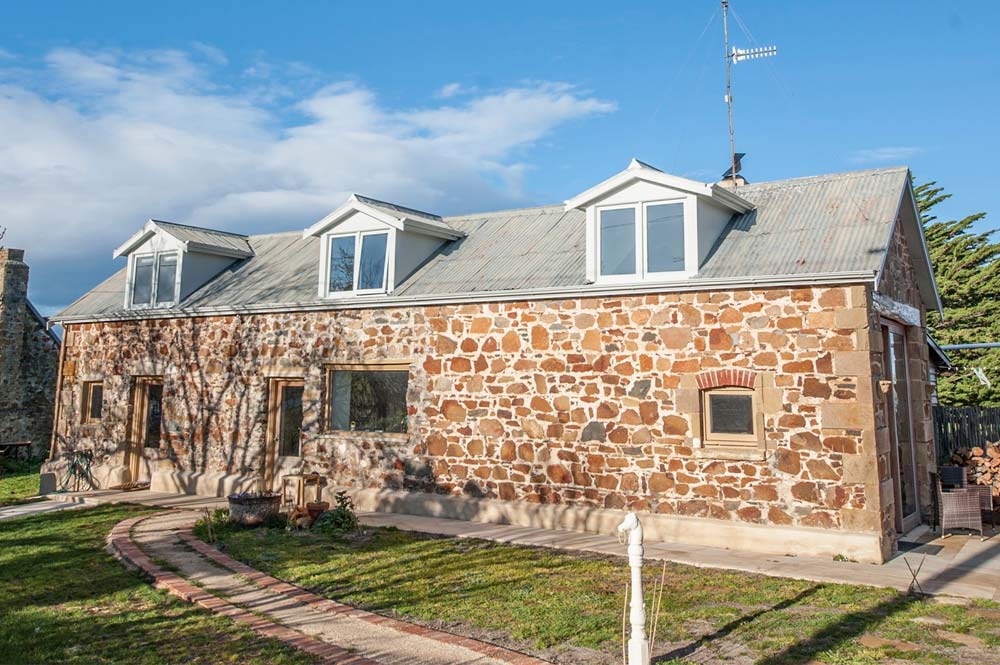 Lisdillon was established in 1830 when James Radcliffe arrived from Belfast and was granted the land, it was then that he established Lisdillon’s salt works and sheep farm. At one point Radcliffe decided to travel back to England, and in a gruesome twist, Radcliffe’s headless and mutilated remains were discovered some time later, on Waterloo Bridge in London. Who did it, why and how this happened to poor Radcliffe remains a mystery.

The property later became a prospering township under a tenant farm system. Nine families formed a small community with a general store, pharmacy, church, school, and post office, as well as fielding its own football and cricket teams.

It was at this time that Truganinni, one of the last full-blooded Tasmanian Aborigines, visited Lisdillon with George Robinson. While she was there she made a basket comprised of grasses from Lisdillon and presented it to the owner at the time, Mark Mitchell. Mark’s daughter, Sarah, later donated it to the Queen Victoria Museum in Launceston.

Tragedy struck Lisdillon again when Mark Mitchell fell off his horse, breaking his collar-bone and becoming an invalid. He was unable to oversee the business of the farm so he had to abandon the property.

Lisdillon was eventually bought by Sir Henry Jones of IXL fame and later by the Hood family. Douglas Cotton, who also owned Kelvedon estate, bought Lisdillon in the 1970s. Douglas’s son, Crispin inherited Lisdillon and oversaw the farm until he passed away in 2014.

Today, Lisdillon is run by Crispin’s wife, Jane and children Richard and Katherine. The family has strong connection to the East Coast and land at Lisdillon and is proudly continuing their family legacy.